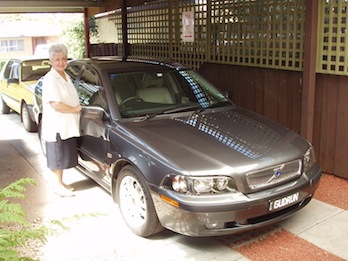 Gudrun Hoffmann’s Titanium Grey 2002 S40T came along in 2006 and is her first Volvo after 28 years of driving two successive Toyota Corollas. The Toyotas were rugged and reliable if not particularly inspiring workhorses which weathered the many years of shopping trips and school runs, so these days in “retirement” Gudrun doesn’t know herself commuting around in a well-deserved and refined cocoon of leather and electric conveniences, not to mention turbo power!

As her son, I can claim some credit for the S40, however, as it was at my insistant urging that mum now deserved something really special and luxurious to drive and that a third Corolla shouldn’t follow the first two, which convinced Dad to begin the search for a baby Volvo to join our family fleet. I suspected that in doing so, Dad would satisfy his own latent desire to have a late model Volvo in the family to enthuse over, and predictably the S40 has won us all over and almost spoiled us for anything else with it’s combination of luxury, refinement and effortless power.

Fortunately though, I remain committed to the 200 Series, although it is nice to climb into the S40 from time to time to see what a couple of decades of Volvo progress and development had achieved! The result in finding this particular S40 was not easily won, though, as months of searching for a car that ticked all the right boxes in terms of condition, model type and even a colour that we could live with culminated in an interstate trip to Sydney to view a promising car that had come on the market, ultimately an inevitable step we found when searching for a particular car within such a small segment of the used car market.

The effort was worth it though, as the car we were to buy was very genuine and in exceptional order inside and out and came complete with some very desirable options such as a rear spoiler and CD stacker, but perhaps it’s real appeal was that the S40 was a specially-optioned “sport” model with slightly lowered suspension, rare two-tone white leather interior trim and “piano black” inlays which beautifully complement it’s titanium grey paintwork and make the car really stand out from most of it’s contemporaries with their largely monotone grey interiors.

Mum would have been satisfied with another run-of-the-mill Corolla but now there’s no going back, and although a long-time Volvo devotee anyway, she now relishes having this S40 as her very own daily driver which should see her out with many years to come of driving enjoyment.