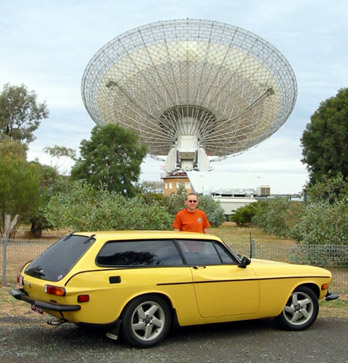 I’ve always been intrigued by the shape of the 1800ES, as far back as the mid-1970’s when my parents purchased our first Volvo (1975 245DL, B20F) in Houston, Texas. I can recall seeing a yellow 1800ES in the dealership’s used car lot and thinking how great it looked in yellow. Fast forward to 1989, and I had just completed my bachelor’s degree and was starting my master’s, again back in Houston after moving all around the country during the previous 15 years. I got the bug for an 1800ES, and joined the Volvo Club of America, and Volvo Sports America, and the hunt was on.

There were quite a few 1800ES models sold in Houston, as one of the biggest Volvo dealers in the USA was located there – Nils Sefeldt Volvo. Sefeldt was also one of the earliest importers of Volvos into the USA. Every weekend, I scoured the newspaper for the sign of an ES, but there wasn’t much to choose from. I even placed a “WANTED: 1800ES” ad in the classics section hoping I’d get a few calls. That worked to some extent – a few people called me and I looked at some cars. The first one was an orange automatic. It looked great on the surface, but wasn’t very nice to drive. The steering wheel looked like it came from a bus, and I felt like I was sitting on the floor. The auto was a dog, and the A/C was useless. I started wondering whether the ES was the car for me – was it the look I loved but the drive I hated?

As I continued my search, I drove a blue manual that had suffered an engine fire (no bonnet!) It went OK, but signs of rust were showing and the engine bay was a wiring nightmare. Then I looked at a green auto (price too high, not very good condition). Then there was a sea green metallic one that had just been resprayed (danger sign!) and had all the side chrome trim strips removed and the holes filled in. Price: astronomical! Finally, I thought I found the right car – and it was a yellow manual too! I drove it, looked it over, and made an offer. The price wasn’t bad, but when I looked back over the photos, I noticed some rust spots I had missed. No good! Then there were a couple terminal rust cases at the same place that a guy put me onto (he saw my ad). No deal – I didn’t want rust. A few more rusty ones that had been sitting for ages…forget it.

Then I picked up a copy of Hemmings Motor guide, and found an 1800ES listed in El Paso, Texas. That sounded good, because it’s very dry there. The car was a yellow, manual, and had been sitting in an enclosed factory from 1980 to 1989 – hadn’t been driven since it was put away because of a bad steering idler arm bush. . I called the guy, and the car sounded OK – no rust to speak of (good!) The original owner was selling it, and his daughter last drove it. She had taken the car in the mid-70’s when she went to college in Colorado, and had originally planned to restore it some day, but got married, had kids, etc.

The car sounded like it warranted a look, so my brother Steve and I decided to drive out to El Paso in early January, 1990, to check the car out. Texas is BIG – it was about 800 miles to El Paso, which we did on a Friday, and looked at the car Friday night. I tried to talk the owner down a bit in price, but he was firm at $2800. We went to the motel and thought things over. Given the other cars I had seen in Houston, it seemed a fair price, even though I didn’t know what mechanical condition the car was in. I decided to take a punt, and called the seller and told him I would pick the car up Saturday AM.

The next challenge was finding a hire trailer. We ended up with a tow dolly – where the front wheels of the towed vehicle are cradled into a 2-wheeled trailer on the back of the tow car. In this case, the tow car was my dad’s 1986 740 Turbo (which I had re-built from a wreck – two cars joined to become one – another story!) It did a great job pulling the ES back to Houston, and not slowly either! Once we got the car back to Houston, Dad and I promptly began removing the interior, cleaning up the engine bay, and getting the car back in running condition. The only real thing necessary to get the car running was having the fuel tank cleaned and a new fuel pump – then it fired right up! Removal of the carpets revealed a pristine yellow floorpan with no rust whatsoever. The paintwork also came up OK after touching up all the years of door dings and minor chips. It’s still mostly the original paint (I’ve done nothing to it other than touch-up and polish/wax), with only the RH rear guard being replaced & resprayed by the previous owner due to a prang, and a small touch-up to the LH front guard due to same. It looks OK, but unfortunately there are minor dents and dings in pretty much every panel. I guess it gives the car character, and there’s something to be said about retaining the factory paint job!

Over the years I’ve gone through the mechanical wear items and replaced anything that needed tending to. If anything needed to be replaced, I always looked at whether I could upgrade or improve that item instead of just replacing with a standard part (for example, braided stainless steel brake lines, or urethane suspension bushings). I never have cared much about retaining originality, although I haven’t made any modifications that couldn’t be reversed if need be. Everything I’ve done to the car over the years has been to suit my personal taste in terms of an enhanced driving experience or to improve (in my opinion) the appearance.

Starting in 1993, I began attending the national Volvo club meets in the USA. The first one turned into a marathon journey of 3000 miles, visiting friends & relatives all around the Midwestern USA. We pretty much hit every national rally in the East until 1999 when we relocated to Australia. I have my share of concours wins behind me, so I really just want to have fun with the car now. One of the more interesting things about many of the USA national rally is that they often have a motorkhana set up. It was always fun being able to show the car in the concours one day, then take it in the motorkhana the next. The ES was quite competitive in with the modified cars in the motorkhana (consistent 2nd & 3rd placing in with 240 turbos etc.), and was quite happy to rev up to 7000 RPM in 2nd gear to avoid shifting into 3rd at the wrong time!

Over the years it’s served me well on many trips and Sunday drives. I couldn’t ever see parting with it, so as soon as I became a permanent fixture in Australia, I decided to ship the car over. My dad was probably glad to get it out of his garage, but Mom was probably happy they were storing it from 1999-2005 as it was one less space Dad could fill with another 1800. He has two of his own, both yellow, both modified – one an ES and one an E. The cars are basically triplets. I’m quite flattered and proud at the same time as Dad has taken my theme and taken it to the next level with his 1800’s, going to the extent of a complete re-spray and re-build of his 1800E, which is a consistent concours winner (now in the master’s class I believe!)

Now that the car and I are reunited, I’ve been spending time doing some much-needed big maintenance items (exhaust system & heater valve were first – transmission gaskets are next on the list). It’s great to be able to share the car with members of the Australian Volvo clubs, and I look forward to bringing it to many national rallies and local events for the foreseeable future.

Below is a list of the upgrades & modifications I’ve made to the car over the years.