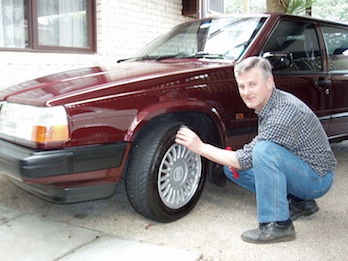 Peter Hoffmann’s 1993 940GLE joined the family back in 1998 when Peter opted for the last of Volvo’s four cylinder rear wheel drive offerings to finally replace his venerable 1976 244 of 19 years, the latter of which remains with us today in my faithful custody. This 940 was decided upon after some months of searching for the right car which involved a frustratingly futile trip to NSW to view what turned out to be a sub-standard example at a time when the local second-hand market yielded too few 940s from which to choose, and Peter’s brief called for a GLE model with leather interior and electric conveniences which further narrowed the possibilities. After earlier knocking back an almost identical car on the basis of it’s colour, Peter purchased this immaculate 940 and over the years has learned to live with if not love it’s dark and unserviceable burgundy duco in spite of the fact that he would have loved a silver or champagne gold one!

For the past decade the 940 has been a comfortable and practical steed for both the daily commute and country runs, offering all the Volvo virtues that Peter first came to appreciate with the 240 series in the 1970s, plus a little extra refinement and some more creature comforts. Peter’s choice of the 900 series over the newer and less proven 850s at the time has been borne out in it’s bullet-proof reliablilty and his ability to undertake virtually any practical and mechanical task on the car himself from routine maintenance upwards. Members will no doubt recognise the accompanying photos as the car with which Peter has received many an admiring glance at a Volvo Club display day and driven home with first prize in his class to reward the high standard of presentation his car has always been maintained in.

There may come a time, sooner rather than later, when the 940 makes way for an S60 to pamper Peter in his retirement, and this time around, unlike with the earlier 244, I won’t be in a position to inherit it. In that event the 940 might hopefully pass to another appreciative enthusiast among us and for Peter that will mean that it’s familiarity and elegant simplicity will have to be sacrificed for the marvel of technology and refinement (and also a little uncertainty) that is a modern generation Volvo. That again depends on the manifestation of a suitable car in the classifieds which experience tells us can be long and arduous process, so the 940 might be with us for some time yet. If one thing is for certain it’s that next time around, Peter won’t be compromising on colour!