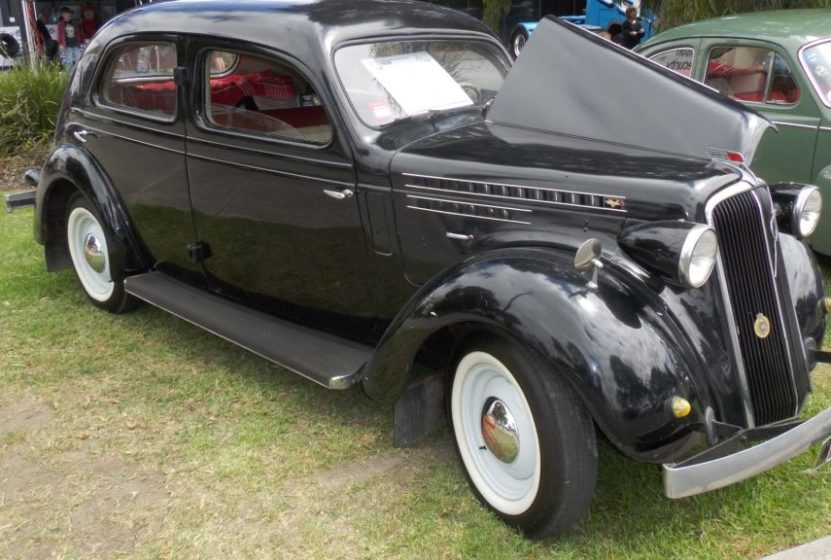 John Johnson, long time Volvo Club member and enthusiast, owns probably the oldest Volvo car in Australia. That is until someone finds an older one some 800 kilometres west of Alice Springs! John was looking at unique car advertisements on eBay when he saw a rare 1938 PV52 listed for sale in England. After negations with Kevin Price in the UK, the car was shipped to Melbourne. It only took a month to reach Melbourne by ship, but took another two months of paperwork before John got his hands on the car.

IMPORTED
It was imported from Sweden to the UK on January 1989 by Mike Lawrence in the town of Brixham in the county of Devon, which is on the south-west coast of England. Apparently His Majesty’s Customs did not take kindly to the importation of a 51 year old car and charged 905 pounds which at the time would have cost A$3,4030 at the exchange rate in 1989! Apparently the PV52 was part of a private collection of cars in Sweden and was put up for sale in 1988 probably on the death of the owner. Mike Lawrence first registered the car in England in February 1992 as YSK 388, and from the Ministry of Transport road safety certificate, was being driven in 1994 to 2003 but only covered 1552 [miles or kilometres?] in 8 years which would average 194 per year. One of the oddities of the paperwork is that Mr Lawrence is recorded as the ‘Keeper’ rather than the ‘owner’ of the car. The only other record of the car was that it was first sold to a Leif Andersson of Partille, an eastern suburb of Gothenburg (the home of Volvo) which is the second largest city in Sweden and the fifth largest in the Nordic countries. Situated by the Kattegat, on the west coast of Sweden, the city proper has a population of 540,132.

IMPROVEMENTS
Since taking delivery of the car, John has fitted new cross-ply tyres from Antique Tyres in the UK. The tyres were fitted with white sidewalls. He has completely rebuilt the brakes – the brake drums were badly worn and rusted and he had new drums cast using an old drum as a mould. The wheel cylinders were re-sleeved and the master cylinder rebuilt by a brake specialist. In order to be registered in the UK the radiator ornament was cut off since it was regarded as safety risk to pedestrians. In Australia the leaping Jaguar had to be removed from cars but the Mercedes-Benz was then fitted with a folding three-pointed star should a pedestrian travel along the bonnet! Wheel bearings have since been replaced with new SKF bearings just like the original. Other than a change of oil and new spark plugs and distributor points, the motor did not require work. The clutch was replaced and the gearbox was fitted with new seals. The windscreen wipers have two separate motors [!] and a defective one was replaced with one from a swap meet for $10. Basic spare parts are available on the internet and the 6 volt electrics were originally from the United States – even the carburettor is identical to these fitted to American cars in the 1930’s.

THE BODY
There was very little rust in the body after 76 years and a cut and polish brought up a bright shine. The steering wheel was in very poor shape and a new one identical to the original was fabricated by Pearl-Kraft of NSW. The seats were originally upholstered in a grey terry-towelling material which can be seen under the jazzy plastic seat covers apparently fitted in the 1950’s. The carpet is worn and is not original; John expects to replace with new carpet similar to the original.

DRIVING
The car is easy to drive and accelerates smoothly in traffic with its 86 brake horse power (64 kilowatt) six-cylinder 3.6 litre motor which has plenty of torque. A remarkable very original car.

THE PV52
Introduced in 1937, the Volvo PV52 was the replacement to the PV51. Much better equipped than its predecessor, the PV52 came with two windscreen wipers, double sun visors, a sprung steering wheel, an electric clock, a loud horn, folding backrests, a heater with a defroster function and a reading lamp in the rear seat along with armrests in all the doors. The year 1937 was a fantastic year for Volvo, setting several records. Production numbers rose to 1,804 units and the PV52 was the 25,000 th vehicle produced by Volvo. The PV52 Special came in a variety of colours; maroon red, light-blue, light-green and black. The all-new colours came with a variety of interior selections.

PV51-52
The Volvo cars were quite expensive compared to their imported competitors. The PV51 was the answer to a request from Volvo’s dealers to offer a smaller and less expensive model. The rear end of the body was similar to the Carioca, but the front was new and the interior was simplified, to cut the price. The PV51 had to make do with a live front axle. In early 1937 the deluxe model PV52 was introduced. The equipment list included twin sun visors, twin windscreen wipers, a watch, a heater and armrests on all four doors. In March 1938 the PV51 Special and the PV52 Special were introduced. On these cars the spare wheel was moved from the boot lid to the boot floor. The cars had an expanded boot to increase the luggage space.

PV52: 1937-38
1046 cars built, de luxe model offered. Today, a production of only a thousand cars would be considered minute, but with a population of only 6 million in 1938 and the country only just recovering from the Depression (1929 to 1933), there were few people with the money to buy a new car. With the talk of war, even those with money would be hesitant to invest. Sweden was neutral during the war 1939 to 1945 but was almost completely isolated from the rest of the world. After the outbreak of the Second World War, production continued, to provide
transportation to the Swedish Armed Forces and other official functions. Most of these wartime cars had a wood gas generator mounted on a trailer behind the car, since the engine had been converted to run on this domestic fuel. In 1942 (when wood gas had not yet reached the height of its popularity), there were about 73,000 wood gas vehicles in Sweden. 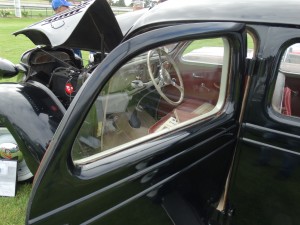 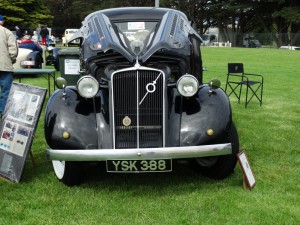 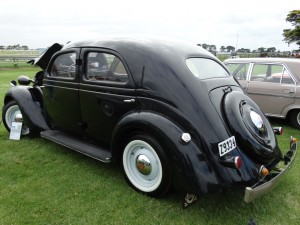