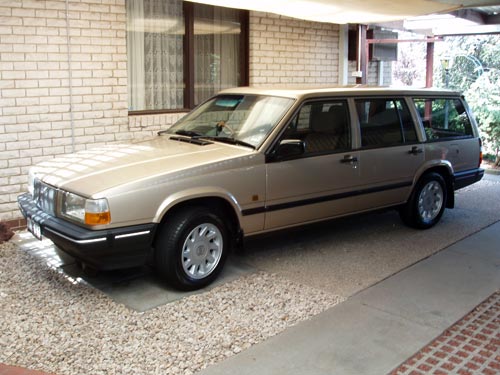 My 1991 740 Wagon joined the family in early 2007 to meet the need for a daily driver with the added practicality of a wagon, a body style which we had never owned before. After several demoralizing months of viewing sub-standard 240s on the used car market, I broadened my horizons and seized on this late model 700 when I saw it advertised locally, and I’m very glad I did. This car was clearly a case of “first to see will buy” and although it had lost it’s sheen somewhat after years as a domestic run-around with no less than five previous owners, I saw through the superficial dullness to a car with sound mechanicals, virtually unmarked interior, and original paintwork that would polish up to a near new standard of presentation.

After some very thorough detailing inside and out we achieved just that, surpassing even my expectations, and in fact the two most substantial cosmetic repairs undertaken were the replacement of a sagging headliner (a common 700 series complaint) and the restoration of it’s bleached original plastic bumpers. A set of new Volvo Nova alloy wheels completed the final picture together with some other essential genuine accessories such as rear cargo roller blind, load area carpet mat, plus no end of incremental upgrades and enhancements since that make the car continuously more enjoyable to own and drive. Over the past two years the car has proudly taken home first prize in the 700/900 Series Class at consecutive display days amongst tough competition, and looks great in it’s champagne gold colour with matching beige “trico plush” upholstery. A truly unique feature is it’s subtle gold window tinting that was dealer fitted when the car changed owners in 2001.

Appearances aside, the 740 is very easy to live on a daily basis and is as comfortable for suburban commuting as it is for effortless highway cruising with the added ability to swallow anything that a trip to the hardware store or auto wrecker might call for it to carry. Whist I always thought of Volvo wagons as workhorses secondary to their sedan cousins, I now understand why some of our fellow enthusiasts never own anything else, as the driveability is every bit the match of the sedan whilst I also have to admit to preferring the clean lines of the estate version over the appearance of the 700 series sedan.

Whist I remain committed to the 240 Series and would have originally liked a late model 240, I love the 740 as it is somewhat more refined throughout, particularly in wagon form, and offers some bonus features such as a split-fold rear seat and ABS brakes which never found their way into the 240s, plus the previous owners of my car opted for some nice add-ons such as factory cruise control, alarm and remote central locking. Electric windows and mirrors, though standard on the sedan version, were wagon options in 1991 and unfortunately not origianally opted for on mine, so that’s on the upgrade list but I’m learning that such electrical tinkering is not as straightforward on these cars as it was on the old 240 series!

I consider the 1991 model, the last of the 740s, to be the ultimate model in the series, as it is essentially a 940 in almost every respect with the completely revised dash, smart all-black exterior trim and “soft nose” front. And of course the wagon body shell, unlike the sedan, was retained when Volvo evolved the 700 Series into the 900 Series for the 1990s. Mine is a refined and practical car that should serve me well for years to come.