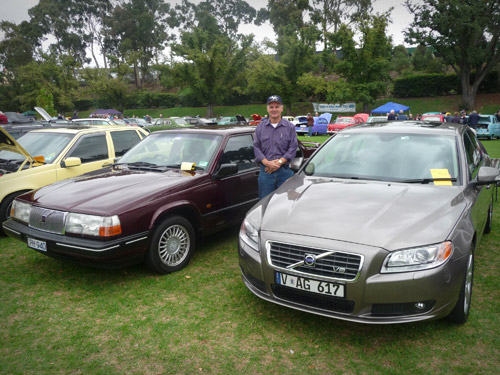 As most of you will know, Volvo acquisitions and disposals within the Hoffmann stable are rare occurrences, given that we nurture our cars and keep them for a long time, so it was with much fanfare and excitement that Peter welcomed his new S80 V8 AWD to the fleet in late March to replace his faithful 1993 940GLE of thirteen years.

A 2007 model, the first of the current series and the top of the range, the S80 is only Peter’s third Volvo in 32 years, and assuming it’s high-technology and vast complement of features and gadgetry stand the test of time as well as the earlier models he’s owned, will probably be his last. From what I can tell it’s certainly an inherently solid and beautifully-built and finished motor car in the fine Volvo tradition, so in that respect it’s likely to provide Peter and Gudrun with many years of safe and pleasant motoring enjoyment in their retirement.

After mum’s gorgeous S40T joined the family in 2006 and essentially re-defined Volvos for us, Peter still vacillated about replacing the 940 as it was faultlessly reliable and he insisted that he would never wear the car out. More recently, however, he has spent in excess of a year searching for the right “modern-generation” Volvo to update to, and in the process looked at S60s, V70s and finally settled on the current-shape S80 as the most desirable update for himself, the first examples of which have now depreciated enough from their new car price to make them affordable – just. Whilst Peter’s “head said V70”, for the practical carrying capacity those cars offer when he might need it, his “heart said S80” as the ultimate luxury sedan. And when mum sat in the demo S80 in the Showroom at the Volvo dealership, she insisted that it had to be nothing else!

The search was a long and frustrating one, and on occasion Peter was heard to be stomping through the house crying “I want my S80 now!”, as too few were appearing on the second-hand market, and most of those were dealer cars listed at inflated prices. Under these circumstances there were even some dark days where a defection from Volvo to Mercedes was considered, but thankfully that didn’t eventuate. Although Peter has always loved the idea of a V8, that was said to be something for “another lifetime”, and his preference was for the D5 diesel S80, or alternatively the T6 turbo petrol model. As such, he customized his online search in the classifieds to avoid the V8s, and it was in fact I who spotted the car he ended up buying during some idle searching on the Carsales.com.au website.

I recall that the car in the advert was local and seemed to tick all the boxes but there was just that pesky matter of the big motor, deemed by Peter to be too powerful and too thirsty for his needs. When I told dad that I’d found the perfect car for him with one little catch, he even refused to look at the advert! Fast forward a week or so and curiosity mixed with frustration lead to a phone call, then an inspection, and the rest, as they say, is history. To cut a long story short, the car was virtually faultless inside and out, laden with extras including sunroof, parking sensors and beefed-up brakes, a good colour-combination inside and out, keenly priced, and ultimately too good to refuse. The fact that the owner, who had intended to keep the S80 for an extended period but had received a company car and thus had a genuine reason for the sale, turned out to have been a colleague of Peter’s in the airline industry some years ago, only served to grease the wheels of the transaction.

I’ve driven the car and it certainly represents a pinnacle of Volvo engineering and refinement. A distinctly V8 exhaust note burbles from the twin tailpipes, but inside it’s silent and silky smooth and only unduly calling upon the car’s ample reserves of power would hint at the potency under the hood, which is the way it should be for a luxury sedan. Stepping up to it from an older-generation Volvo is somewhat of a culture shock as there is comparatively little travel in the accelerator pedal and the car will shoot off the mark and easily get away from the unwary! The interior is luxurious and stylish, yet functional and unmistakably Swedish in it’s uncluttered minimalism and use of quality materials. It includes Volvo’s now ubiquitous floating centre console, beautifully done on the S80 in a triumph of style and refinement, and a good step forward from the previous S80 series. The same applies to the body shape where those controversial taillights have been nicely reworked as have other style elements without departing fundamentally from the basics, and the frontal styling is clean and modern and consistent with the current V70 range. In true Volvo fashion, it’s an evolution rather than a revolution. I’d better leave my observations at that, lest this become a drawn-out motoring review article. Suffice to say it’s a big, beautiful and capable car, and Peter loves it.

As for that motor, it’s efficient and refined and at the end of the day, not huge in capacity compared with other V8s out there. Apparently and surprisingly, it’s also slightly more economical than the T6 engine on paper, and when driven conservatively and sensibly, as it always will be, not unduly high in consumption. It’s just nice to know that the power is on hand should it be required, plus it gives dad a warm and fuzzy feeling to know that there’s a thumping V8 there! So I’m told, anyway, as I can’t see myself driving it too often.

Some essential genuine accessories such as a boot liner tray, rubber floor mats and headlight protectors have since been procured from Volvo, and Peter, armed with a vast suit of car care products, has been methodically working his way around and through the car to clean, polish, and condition it back to a better-than-new standard of appearance. It really does looks better each time I see it.

Things are indeed all about the S80 at the Hoffmanns at the moment, and I tell dad that I hope he never forgets who found this car in the classifieds for him. He says he will think of me every time he tanks up with petrol!