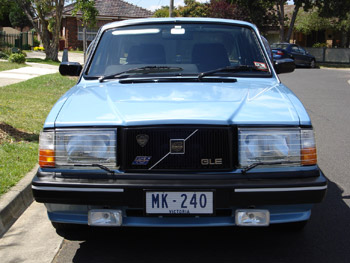 My blue 1985 240GLE joined the family in early 2001 after dad Peter and I undertook a search for a clean and original 240 for me to take over from my 1976 244DL as a daily driver, thereby sparing the older 240 (which had become somewhat of a pampered “show car”) from the elements and rigours of daily commuting. I started with humble expectations, looking at a number of sub-standard earlier GL models on the market before spying this beauty in the paper one Saturday morning, billed as “immaculate” by the dealer seller and boasting the full complement of GLE features including alloys, sunroof and full electrics, all for a modest asking price.

Blue with a blue interior was probably my least favoured colour combination, having hoped for a silver-green or champagne gold one, but this car ticked most of the boxes on inspection and was far better than any other example we had viewed. It’s sky blue metallic paintwork gleamed in the sunshine in the yard when I first laid eyes on it which boded well for the thorough inspection we gave it, and the car came home with me that very day. Inside it was as new and I quickly grew to love the rich dark blue striped velour upholstery and matching colour-coded dash and trim that complements the exterior very well, and makes a nice change from Volvo’s obligatory beige trim of the period. It was clear that the car must have had seat covers and otherwise undemanding owners as the fabric was unmarked and had suffered none of the fading typical of this colour which now makes nice original examples virtually impossible to find.

On closer inspection, certain panels of the paintwork had suffered from some sub-standard repairs, and the fact that I have never been able to establish any history whatsoever on the car prior to my owning it has always frustrated me, as has the fact that any service history or receipts that were to be forthcoming from the dealer mysteriously disappeared once I had signed for the car! However, it’s general condition and top mechanical order seemed to speak for themselves, and after some initial niggles including a burst radiator and seized shocker, the car has proven to be a sound and reliable machine. In fact, the mere 30,000kms I have added in 8 years to it’s purchase mileage of 175,000 should see the car outlive any wear and tear I could ever inflict upon it!

Predictably, it wasn’t long before the enthusiast in me took over and a full respray was caried out in 2004 with another old 240, a green 1984 GL, duly replacing the GLE for the daily run. Some new exterior trim componants and a brand new set of original “Virgo” alloys from Volvo completed a restoration (or rather rejuvenation) in which I spared no expense, and an endless array of genuine accessories and upgrades for which I seem to have become famous followed, and now the car has taken it’s place alongside the old white 244 as a pampered classic which normally only ventures out for recreational drives under sunny skies. However my new undercover carpark at work now ensures that I can also enjoy this brilliant 240 on a daily basis if I so desire. They are, after all, a driver’s car that are meant to be driven!

To me, the 1985 model is the pick of the bunch as it has the high compression B230E motor as indicated by it’s smart black rocker cover, and (at least until the start of the 1990s) it was the last and best of the top-spec GLE models with all the trimmings, after which only a basic GL model 240 sans alloys, electics and premium interior trim was offered, as Volvo expanded the model range of the 700 series to fill the breach of the shrinking 240 series. The absence of any chrome exterior trim which Volvo abandoned entirely by the 1990s and the ever-popular five spoke alloy wheels, combined with the lustrous sky blue duco and dark interior of this car give it both a sporting and timeless character that I can always enjoy and appreciate.

This 240 is a real head-turner and I’m proud of the fact that it has taken home first place in it’s category at all but one club display day I’ve taken it too, and I’m sure that by now most club members are sick of the sight of it, but I never tire of nor fail to appreciate the many compliments that the car attracts, and together with my white 244 I’m proud to be flying the flag for the 240 Series in the Volvo Club. For the future, there is enough potential in this 240 to keep me busy and motivated as I have yet to tackle any underbonnet detailing in a serious way as I’ve done with the other 240, so there remains an array of subtle polishing, plating and coating to make the engine bay sparkle whilst retaining it’s originality, and my task list remains as long as my arm!

Whilst 240s exit our roads these days at an alarming rate, this one is definately a car for the “long haul” that I look forward to driving for many years to come.