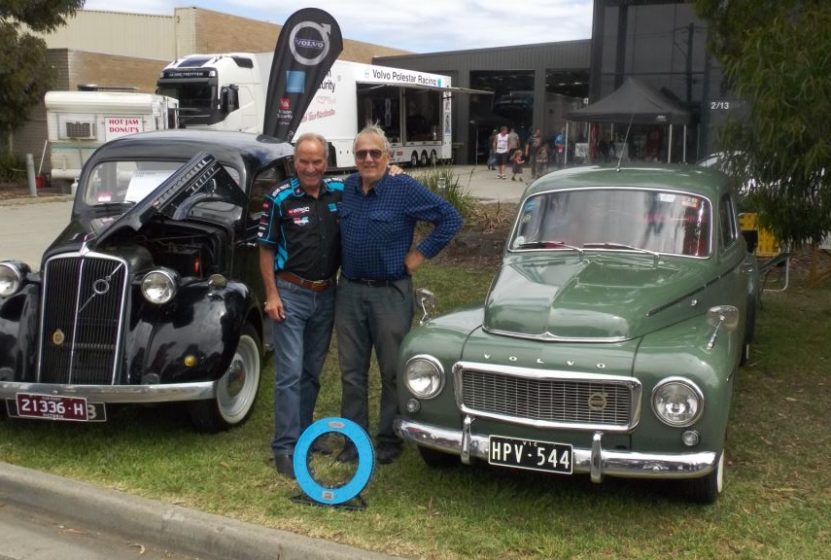 Early 1968, I was interested in purchasing a 1963 Wolseley 444, as I was driving a 1963 Volkswagen 1500 station wagon at the time. I took a Wolseley for a test drive, and wasn’t overly impressed with it. I then needed to reconsider my choice and started thinking about a Volvo 122 station wagon.

I went to a Volvo dealership in St Kilda in July 1968 and upon entering the showroom, I saw a brand new, pale blue, 1800S. The salesman approached me and asked what I was looking to buy. I told him I was interested in a 122 station wagon, and he informed me that they had ceased production. However, he did offer me immediate delivery on the 1800S. I said to him that I wasn’t interested in that model, and he told me about a dealership in Mount Alexandra Rd, Moonee Ponds that may be able to help me.

I took his advice and went to Moonee Ponds. When I arrived, I saw two 122 sedans for sale – one was blue and the other was cream, however the blue was sold. The cream car was a 1964 model in original condition, with 47,000 miles on the Speedo, for $2,100. I took the car for a test drive, and fell in love with it straight away. It had to be mine. This was the beginning of my forty year love affair with Volvos.

I paid a $10 deposit on the Saturday, and on the following Monday, I returned and paid the balance in cash. I then drove it with pride to its new home. On this drive home, little did we know that 40 years later, it would still look the same as it did on this day. This is the story of Volvo #1.

After showing my car off to my dad, he was also very impressed with the car. He then went out and bought himself a brand new 142 that became his pride and joy. In total, he updated to a newer model three times, and was more than happy with them. Following his death in 1980, I inherited a yellow 1974 142. This became Volvo #2.

In 1988, I happened to be driving past a Volvo dealership in Dandenong, and I couldn’t believe my eyes when I saw a very glamorous gold 262 Bertone. It had a Californian front, which looked very impressive. Due to its uniqueness, I just had to have it and it became Volvo #3.

During this time, there was another Volvo in the family that belonged to my daughter. It was a red 1969 144 automatic. As she needed a water tank for a house, I made a deal with her and it became Volvo #4.

As my collection was growing, I always kept an eye out for unique cars. My close friend, Lance Phillips, was aware of this passion, and in 1996 told me about a beige 1974 144 from a deceased estate. This car had travelled a mere 60,000 kms and looked brand new. To my amazement, the car registration showed that it was registered on the same day, of the same month in the same year, as my dad’s 1974, 142 Volvo. This sealed it for me, and I felt that it was too much of a coincidence, and this became Volvo #5.

Some may think at this stage, that enough was enough, but no!!!

In December 1999, Lance Phillips again mentioned about a Volvo that he thought I might be interested in. This time, it was a blue 1982 245GL station wagon that was for sale at Bulleen. After taking it for a test drive, I weakened, and this became Volvo #6. It’s ironic that after 30 years, I finally got the station wagon that I was after when I was looking to buy my first Volvo.

October 2004 saw John Fleming phone me regarding a 1960 PV544 that he had heard was up for sale by Irene Pearey. He wanted to know whether I was interested or not. Well…of course. The opportunity to purchase this type of car only happens once in a lifetime. I just couldn’t say no, and this became Volvo #7.

As at 2008, I still have 6 of the 7 Volvos. Unfortunately, my dad’s yellow 142 was retired and wanted a sea change, so now it lives at Phillip Island. I have since built an American Barn which houses 4 of the 6 cars, while the other 2 live in a garage. I love driving them all (one at a time of course) and am always on the lookout for more unique cars to add to my collection. However, a divorce may cost more than another car and I need all the money I can get to keep my fleet in the manner to which they have become accustomed.